It what may be the closest Alaska will ever come to a clash of political titans, Alaska AFL-CIO President Vince Beltrami has filed to run against conservative stalwart Sen. Cathy Giessel for the State Senate seat she currently holds.

Sen. Giessel represents a district that covers the Muldoon/Tudor areas of East Anchorage and parts of Hillside and South Anchorage. 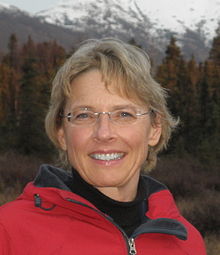 The announcement also means former Rep. Harry Crawford, who had filed to run for either Giessel’s Senate seat or Rep. Lance Pruitt’s house seat, is all but certain to take on Pruitt.

A race between Beltrami and Giessel is immediately the signature race of Alaska’s 2016 election cycle.

Both Beltrami and Giessel are well known as aggressive advocates of their political perspectives.  Giessel is unabashedly pro-oil industry, and socially and fiscally conservative. Beltrami is well known for his progressive views on workers rights and challenging the oil industry on issues such as taxation and local hire.

This race certain to be the best funded and most contentious race in the state this fall.

Here is a statement released by Beltrami’s campaign:

Anchorage, AK – May 31, 2016 – Vince Beltrami, president of the Alaska AFL-CIO, the state’s largest labor organization, has filed to run for the Alaska State Senate today as a non-party affiliated candidate.

“I’m running because our current senator is the biggest contributor to the hyper-partisanship that has put Juneau in perpetual gridlock. Cutting our state’s university system, attacking public education, refusing to vote for a balanced comprehensive fiscal plan, and catering to the furthest right element in the Alaska political landscape are leadership failures that threaten our way of life, our economy, and the future of the Permanent Fund. I intend to offer bold leadership, not blind partisanship,” Beltrami said.

Beltrami has never held elected public office but has been deeply engaged in the legislative and electoral process on the state, federal, and local level for the past decade. He has spearheaded successful ballot initiatives and worked across the aisle to support working families.

Beltrami and wife Marja have resided in Alaska for three decades. He has raised his family in Alaska, is proud of the accomplishments and successes of his three daughters, and is happily enjoying a growing band of grandsons.

“I came to the conclusion that I MUST run,” Beltrami said. “I don’t NEED to run. I’ve had a successful career and am just a few short years away from playing with my grandkids full time. I realized I needed to do this so that my kids and grandkids can have a bright future in Alaska.”

15 Comments on "LET’S GET READY TO RUMBLE!!!!!! BELTRAMI FILES TO RUN AGAINST GIESSEL"